Everyone has moles (nevi), and they can appear anywhere on the skin. Moles may have many different appearances, they can be flat, tan (like a freckle), pink, brown or black in color. Often moles enlarge overtime and some may develop hairs. Over the years moles can change, they may become raised or lighter in color. Some moles never change at all. 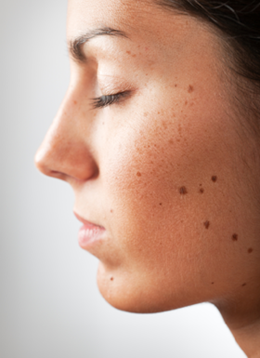 Studies show that certain types of moles may have a greater risk of becoming cancerous often referred to as dysplastic or atypical nevi. Dysplastic or atypical nevi may develop into a form of skin cancer known as malignant melanoma. People with dysplastic nevi may have a greater chance of developing malignant melanoma and should follow regularly with a dermatologist to check for any changes, which may indicate skin cancer.

The risk of developing melanoma is increased when there is a history of severe or multiple sunburns. Sunscreen and protective clothing is recommended and should be used to shield moles from excessive sun exposure.

The majority of moles are benign (non-cancerous). They are generally not a threat to your health. Any moles that do something out of the ordinary warrant medical concern including any change in color, size, and shape or if the mole bleeds, itches or becomes painful. If you notice a mole that does not follow a normal pattern you should schedule an appointment with a dermatologist for evaluation. A biopsy may be necessary to determine if the mole is cancerous.

Some people chose to have moles removed simply because they are irritating to them (medically removal) or they feel that they are unattractive (cosmetic). Removal of a mole for a cosmetic reason is generally not covered by insurance and could be performed at a cost to the patient.

Most procedures used to remove moles generally take a short time and can be performed in your dermatologists office.