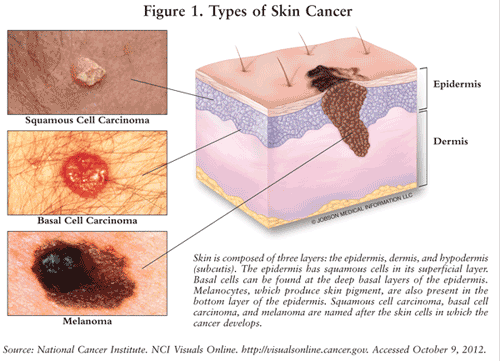 AK’s typically occur on body parts that are most often exposed to the sun. They usually appear as small crusty, scaly, or crumbly bumps or horns. Early on, they may come and go. Sometimes they are more easily detected by feel than by sight.

One of the most common skin cancers, caused by long-term sun exposure. Frequently, two or more features are present in one tumor. In addition, basal cell carcinoma sometimes resembles non-cancerous skin conditions such as psoriasis or eczema.

Squamous cell carcinoma is the second most common skin cancer after basal cell carcinoma. They usually appear as thick, rough, scaly patches that may bleed easily. They often look like warts and sometimes appear as open sores. The skin around the site may exhibit signs of wrinkling, pigment changes, and loss of elasticity.

Melanoma is the most serious form of skin cancer, if it is detected early and removed while it is still thin and limited to the outermost skin layer, it is almost 100% curable. Once the cancer advances and spreads to other parts of the body, it is hard to treat and can be deadly.